In the midst of urban regeneration after the Second World War, in Amsterdam, the architect Aldo Van Eyck develops an urban project through which he conquers the city with 737 playgrounds built between 1948 and 1978.

When the new urban decisions were made in favour of vehicles and wheeled mobility, Aldo van Eyck knew how to become the first architect who included the child as a fundamental agent in urban development. The need for safe spaces for the little ones was something latent and playgrounds were the answer.

He establishes the child as the fundamental objective of the city and in this way establishes the citizen in a generic way, since everything we do as children forges us as adults of the future.

His playgrounds were located on abandoned lots, unbuilt areas, sidewalks that took up space from the car and even on land previously occupied by demolished buildings after the war. Its composition was reduced to the minimum expression. The circular or rectangular sandboxes were the protagonists of the space. They were accompanied by small concrete or wooden structures and also by metal structures with various geometric shapes that changed over the years. The great value of all these always abstract elements was to encourage the use of the imagination to bring them to life.

In his text “The Child, the city and the artist” he defends the power of imagination. The imaginative child who practices free and active play finds a way to connect with the environment that surrounds him. He is capable of giving meaning to abstract spaces and geometric shapes where the possibilities are endless. He appropriates the play space and makes that little piece of the city his home.

In 1956 CIAM X (International Congress of Modern Architecture) takes place in the city of Dubrovnik. In this meeting, Van Eyck makes a presentation entitled “Lost identity” made up of four panels where he describes the problem of the loss of identity in cities, highlights the importance of child’s relationship with the city, exposes the solution, exemplifying with his projects and it concludes with an “appeal to the authorities”.

To give this message he refers to when after a heavy snowfall children take over the spaces of the city and the entire city is almost at their disposal:

“You know what happens after a heavy snowfall: the child temporarily becomes the Lord of the City. You can see them running in all directions, collecting snow on frozen cars. (…) It is up to you now to conceive of something more permanent than snow”

He proposes to create something more permanent and repeatable. Something that can be extended to different places in the city and that the city is capable of absorbing them aesthetical and physically, integrating them into its urban plot. Something natural and elementary that responds to the disposition and movements of children and that activates their imagination.

Today, his message can seem everyday to us, since, fortunately, all our cities have safe spaces for the little ones, but it is good to look back to remember and thank how Aldo van Eyck changed the urban experience forever. 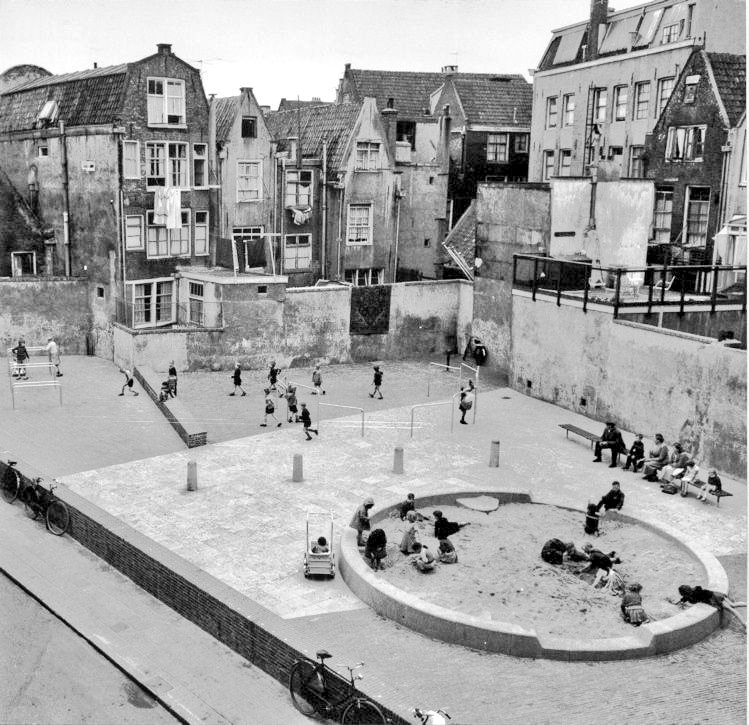 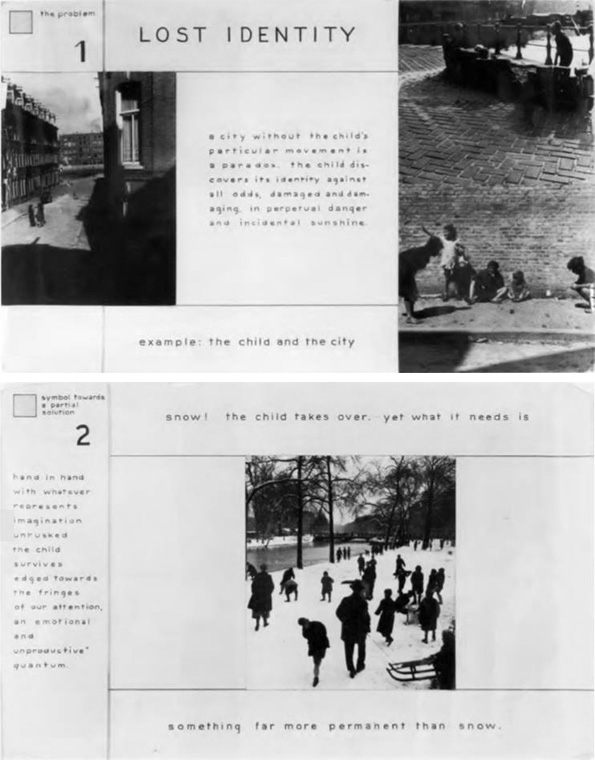 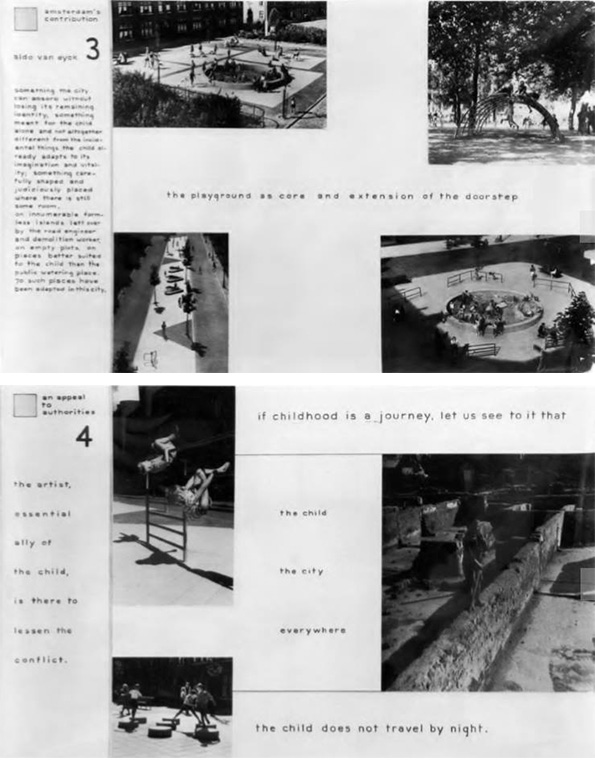 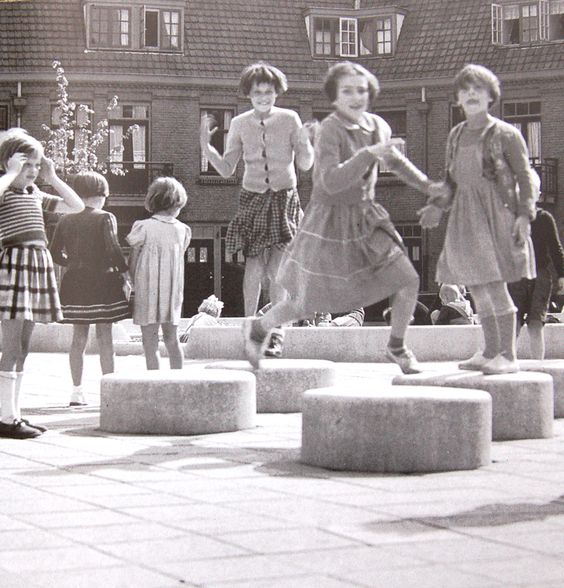 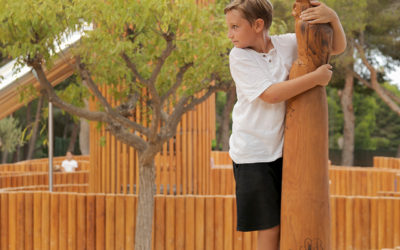 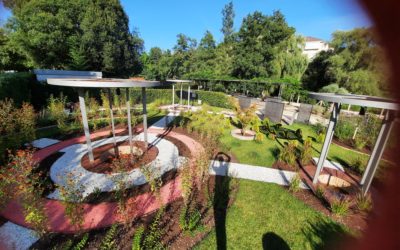 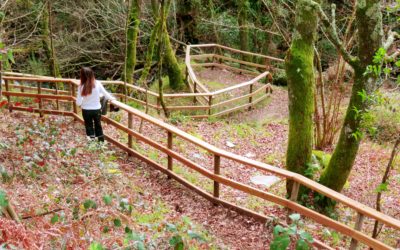 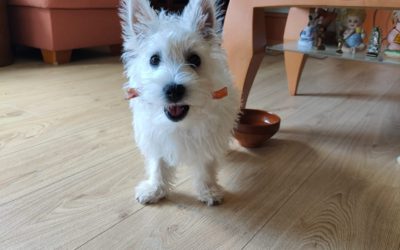 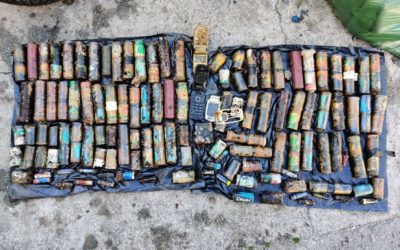 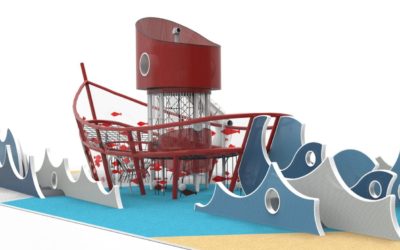